Visiting Our Lady of Charity

The Shrine to Our Lady of Charity in Miami, next to Mercy Hospital, is a must-visit for local Cubans and for those that love Our Lady.  It was built by the late Auxiliary Bishop Agustin Roman from 1967 to 1973. At a time when the vast majority of local Cubans were recently exiled, and with little financial means. Bishop Roman was able to raise the needed funds, sometimes pennies, nickels, and dimes at a time.  It is a beautiful memorial to Cuba’s Patroness and one of great solace for local devotees.

Imagine the emotion felt when I was told my wife and I were to be part of an Emmaus team for a retreat being held in Santiago, Cuba, where the original Basilica of Our Lady of Charity is located!  A group of 10 Emmaus brothers and sisters from Miami, after having served in the second Emmaus retreat in Havana, boarded a bus for the 15-hour adventure from Havana to El Cobre. The distance is only 760 kilometers or approximately 470 miles.  Anywhere else in the modern world that is a 6-7 hour trip.

A fairly modern Greyhound type bus, made in China,  picked up our group and we had it to ourselves. At first, it was a very comfortable ride until we left the outskirts of Havana and the main road running from West to East became unpaved. The bus tour guide blamed the government before the revolution for misusing the funds as to why the road was not completed.  Excuse me but that was over 60 years ago! It still is not completed!

The views of the Cuban countryside were spectacular, the valleys and mountains with the lush green foliage and palm trees, seemed like a three-dimensional painting. The poor quality of the road continuously brought us back to reality. Potholes were huge and numerous. While the modern bus traveled at over 60 miles per hour, horse-drawn wagons would pop up in its way. Not a good combination!  At times it seemed like a video game where the aim was for the bus driver to miss as many wagons as possible without running them over! Same for the potholes! It was very stressful and dangerous for all involved.  At one point I made the mistake of going to the front of the bus were the cooler was with water bottles. A horse jumped in front of the bus causing the driver to slam the brakes and throw me against the driver’s window. From there I toppled over into the stairwell and was not thrown from the bus because my Guardian Angel was there to save me! Geez and the driver continued as if nothing while cursing the horse and me!

One of our fellow travelers had asked to stop at the outskirts of Camaguey, about halfway to Santiago, to visit a dying uncle in a hospital. He asked me to accompany him to give the patient a blessing. Wow. There are no words to explain, but I will try.  Horror, filth, darkness, inhospitable, unhygienic, disgusting, embarrassing and ultimately very, very sad. The “hospital” was like nothing I had ever seen. Full of insects, no lights, dirty, no bedsheets, patients in beds outdoors and in hallways, no privacy and no soap or hot water. Nurses with unsterilized equipment. Doctors without scrubs or masks. The person we visited was in an unairconditioned room, in a bed with no linens or pillow and full of flies. And that was before the coronavirus crisis! Third world slums have better facilities than this.

Oh but wait, the healthcare is free!

As we pulled away to continue our odyssey, we were dismayed and saddened by the day-to-day burdens the Cuban people suffer. We were quickly refocused when we started again to see how close you can get to pedestrians, horses, and wagons without killing them!  Soon the sun began to set and you know what means…. Darkness, going at 60 miles per hour, with no street lights and people, wagons, and horses still on the streets!  But this time we were entering the mountainous areas.

By then we were on our 9th or 10th rosary, praying to survive this trip. Going up a dark mountain at those speeds with potholes was unnerving, to say the least. But then it all became worth it, because out of the darkness and fog of the mountains the most beautiful sight you will ever see, the Basilica was lit up and standing alone on top of the mountain. What a surreal and majestic site!

Since 1687, Cubans have had a special devotion to Our Lady of Charity. In 1916, Pope Benedict the XV declared her the Patroness of Cuba.  She is displayed in the Basilica, behind the altar, two floors up. There is a private chapel on the second floor behind her statue. Once in the chapel, she is turned around and those in the chapel can see her directly and right in front of you! It was one of the most special moments in my life. The pictures here are from that moment.

The Pastor of the parish is our Emmaus coordinator in Cuba. It is such a privilege and blessing to have him involved with our evangelization efforts on the island.  Because of the coronavirus, we may not be back in Cuba until later in the year. In the meantime, we pray for those brothers and sisters enduring greater hardship than us, with a disastrous healthcare system and lack of the most basic food items.  Jesus, we trust in you! 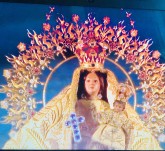 This entry was posted on Thursday, April 2nd, 2020 at 3:56 pm and is filed under Catholic Family Life. You can follow any responses to this entry through the RSS 2.0 feed. You can leave a response, or trackback from your own site.